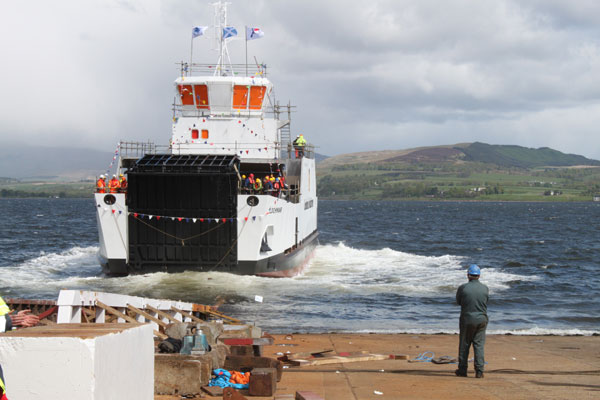 A cutting edge ferry, which is the second of two unique ‘hybrid’ vessels, was launched on the Clyde today at Ferguson’s shipyard in Port Glasgow. The ferries are being built following a Scottish Government investment worth over £20 million, which has continued the proud heritage and tradition of shipbuilding on the Clyde.

The hybrid ferry, named MV LOCHINVAR, is one of only two passenger and vehicle roll-on, roll-off ferries in the world to incorporate a low-carbon hybrid system of diesel electric and lithium ion battery power. The innovative vessel was launched by Mrs. Patricia Platten, wife of Caledonian Maritime Assets Ltd (CMAL) CEO, Guy Platten.

Grenville Johnston, Chairman of Caledonian Maritime Assets Ltd commented: “The launch of both MV HALLAIG and MV LOCHINVAR demonstrate CMAL’s commitment to leading the way in innovative ferry design and our focus on creating new vessel technology. These ferries will come into operation in 2013 and their technology will be cleaner, quieter and cheaper to operate and maintain than ever before. Their introduction to our fleet demonstrates the vast economic potential of developing green technology within the transport industry.

“We are very proud that the design and construction of this new class of ferry, using world class technology, was carried out in Scotland, continuing a proud tradition of shipbuilding on the Clyde.” 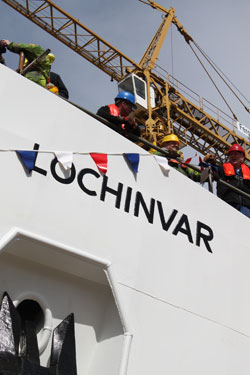 The sea going roll-on, roll-off vehicle and passenger diesel electric hybrid ferry is nearly 150ft long and will accommodate 150 passengers, 23 cars or two HGVs. It is expected to come into service on the Tarbert to Portavadie route towards the end 2013, following fitting out, testing and certification.

Transport Minister, Keith Brown said: “With its sister ship MV HALLAIG launched and due to come into service later this summer, I’m delighted MV LOCHINVAR is fast approaching the start of its own working life.

“The value of having these cutting edge vessels – the first of their kind anywhere in the world – built here in Scotland cannot be underestimated, not just because it keeps the rich shipbuilding heritage of the Clyde alive and well, but the investment supports local jobs and apprenticeships in the local community. Everything the Scottish Government does is geared towards invigorating our economy, and the building of these ships at Ferguson Shipbuilders Ltd neatly encapsulates that ambition.

“I’m delighted that MV LOCHINVAR has successfully followed in her sister’s wake ‘doon the watter’ and look forward to seeing her take her place among the fleet when she comes into service on Loch Fyne later this year.”

Richard Deane, Managing Director, Ferguson Shipbuilders Ltd, added: “We would like to acknowledge our appreciation to both CMAL and the Scottish Government for placing the orders for the Hybrid Vessels with Fergusons. The build of MV LOCHINVAR and sister vessel, MV HALLAIG, was a welcome boost to us and, indeed, the Inverclyde Community.” 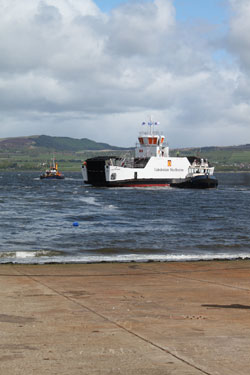 Caledonian MacBrayne (CalMac) Managing Director, Martin Dorchester, said: “We are delighted to see the second hybrid ship nearing completion and are looking forward to her entering service later this year. It’s hard to believe it is little more than five months since her sister ship, the MV HALLAIG, was launched from the same yard and we will continue to work closely with CMAL to ensure the ship is ready to enter service as quickly as possible.”

He added: “It is always pleasing to see new ships join the CalMac fleet and we are grateful to the Scottish Government for providing the funding to make this possible. We are also eagerly waiting for construction to start on the new Stornoway-Ullapool ship which is due to enter service during 2014.”

The first hybrid ferry, the MV HALLAIG, was launched in December 2012 and is nearing completion at Ferguson Shipbuilders. She will enter service this summer on the Sconser to Raasay route.

CMAL ran a naming competition for the new ferry and the results were announced on 4th April 2013. The names of all ships in the hybrid fleet will follow the MV HALLAIG and be named after Scottish literature. Hundreds of people voted for the name and Lochinvar received over 55 per cent of the votes cast, with the name reflecting the poem by Sir Walter Scott, written in 1808.