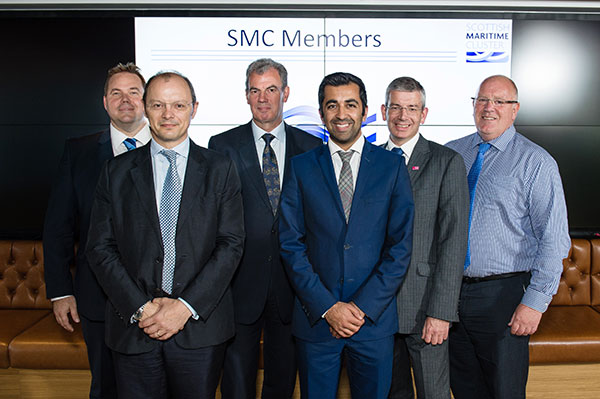 A group of leading maritime businesses have joined forces to create a new Scottish Maritime Cluster aimed at boosting economic growth and securing a larger share of the multi-billion dollar global maritime market.

The Scottish Maritime Cluster was officially launched by Scotland’s Minister for Transport and the Islands, Humza Yousaf at the start of London International Shipping Week (LISW) 2017.  As one of the world’s biggest and most prestigious maritime events, it provides a platform to promote Scotland’s maritime sector to the global industry.

New economic data released to coincide with LISW by Maritime UK estimates that the maritime sector in Scotland in 2015 supported 39,300 jobs, just under £9.3 billion in domestic output (through business turnover) and made a £3.6 billion contribution to the economy.  Scottish maritime companies account for more than 20% of the UK’s total maritime sector on these measures.

To support the Cluster’s work, Scottish Enterprise has provided funding for a one-year post for a network integrator, who will be responsible for producing a compendium of Scotland’s maritime sector and what it offers.

Membership currently stands at 40 organisations, including ship builders, ship management companies, naval architects and designers, maritime engineers, offshore energy providers and universities and other education and training institutions.  The leadership team is hoping to attract more member organisations and individuals, particularly those in the oil and gas sector.  In addition, the Cluster will reach out to businesses across sectors, including those not currently involved in maritime services, to help them consider how they might be able to make a potential contribution to the maritime sector.

Minister for Transport and the Islands Humza Yousaf said:

“Scotland’s maritime sector has an incredibly important role in our national economy, contributing billions of pounds and supporting tens of thousands of jobs.

“The Scottish Maritime Cluster will bring a wide range of businesses together.  It’s hoped this will pool the vast wealth of knowledge and expertise to make sure the sector maximises its potential and helps Scotland to continue being an important player in the global market.

“The launch of the Scottish Maritime Cluster is an exciting development for the industry and I wish all parties involved every success with this venture.”

“Scotland boasts a rich maritime history and today, it is home to the UK’s second largest maritime cluster.  We have strong and globally-recognised expertise, based on outstanding engineering capability, highly-skilled people and a drive for innovation, and ship owners have access to a wide range of world-class maritime services and support.

“We believe there is untapped potential in the sector and the Cluster has formed to drive the sector forward to gain more prominence and recognition on a global scale, seek out new business and development opportunities and secure future economic growth.

“In the current political and economic climate, with Brexit negotiations underway, this kind of industry collaboration is vital.  Those involved in the Cluster have clear and common ambitions and there is a commitment to leveraging our collective expertise to boost the maritime industry.  We know we are more powerful if we work together to place Scotland firmly on the global maritime stage.”