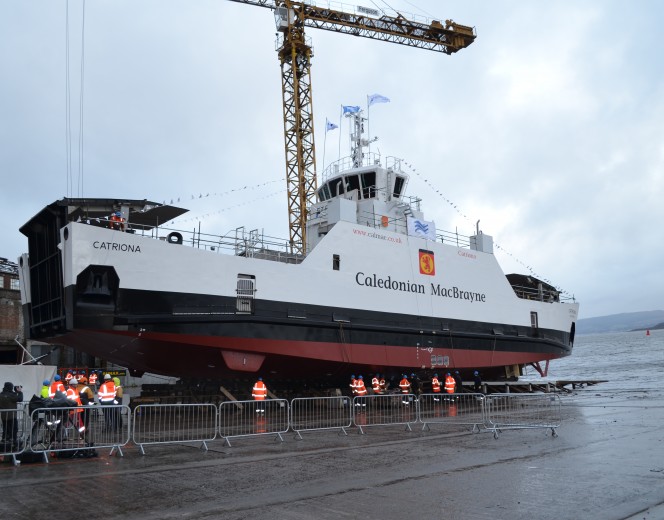 MV Catriona was delivered 6 weeks ahead of schedule. MV Catriona was handed over to CalMac Ferries Ltd by Ferguson Marine Engineering Ltd on 20 September 2016.

MV Catriona will sail on the Claonaig to Lochranza crossing.

“We are very pleased with the quality of Catriona and that Ferguson Marine delivered the vessel early.
“What a fantastic result for a yard that was closed two years ago.
“We are building another two vessels here in Fergusons and we already see the productivity and efficiency gains the new shipbuilding techniques and facility is providing.”

CMAL’s MV CATRIONA was awarded ‘Electric & Hybrid Propulsion System of the Year’ at a ceremony that honoured the world’s finest engineers, innovations and products in the electric and hybrid marine arena.

With a judging panel that boasted some of the world’s leading marine journalists, industry experts and academics, the Electric & Hybrid Marine Awards is one of the most sought-after accolades within the marine industry.

MV CATRIONA  was launched on the Clyde on 11th December at Ferguson Marine Engineering Ltd’s (FMEL) shipyard in Port Glasgow. She is due to start sea trials in July 2016 with the handover to the operator planned soon after.

Our latest ferry was launched by Mrs. Anna Østergaard, wife of our Chairman, Erik Østergaard, who commented about how proud we are that the design and construction of the new ferry was carried out in Scotland, continuing a proud tradition of shipbuilding on the Clyde. 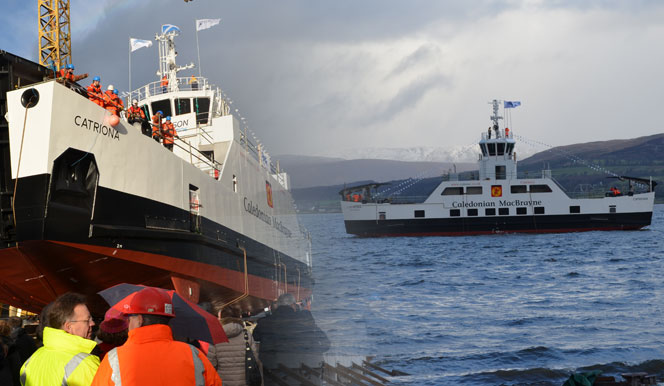 Transport and Islands Minister, Derek McKay, attended the launch and said that the official launch of the MV CATRIONA marked a further milestone in the Scottish Government’s improvements to the fleet serving the Clyde and Hebrides network.

“Delivery of this third hybrid vessel not only underlines the Scottish Government’s commitment to making our ferry fleet sustainable and reliable, but it also showcases the expertise on offer at the FMEL shipyard. The technology used on the new vessel will mean it will be fuel efficient and have lower maintenance costs, whilst still ensuring a quality service for passengers.

“The Scottish Government has invested a record £1 billion in vessels, ports and ferry services since 2007. With a £97 million order made for two new vessels for the fleet – also to be built at the FMEL yard on the Clyde – there will be further good news to come for our island communities.

MV CATRIONA’S sea trials are scheduled for July 2016 and she will enter service following testing and certification.  The route for this ferry will be announced by CalMac Ferries Ltd shortly.

The £12.3 million vessel is a further investment by the Scottish Government in CMAL’s Clyde and Hebrides Ferry Service fleet and is the first ship built by Ferguson Marine Engineering Ltd (FMEL), who was awarded the contract in September 2014, following their purchase of the Ferguson Shipbuilders business.  The previous two hybrid vessels were also built in the same yard.

Progress on MV CATRIONA is going well, with all fabricated sections now complete on the launchway and ready for launch in a month’s time on 11th December 2015.

Factory tests of equipment have been completed with engines, switchboards, propeller units and batteries all tested. The final factory test was a ‘string’ test of batteries, switchboards, drive units down to prop motors held in Rotterdam 2nd November.  All equipment has now been delivered to the shipyard and will be fitted prior to launch.

Following the launch, commissioning of the equipment will take place prior to harbour acceptance trails and sea trials which have been set for March 2016. 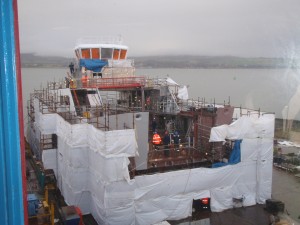 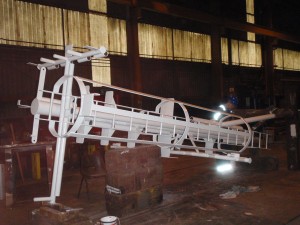 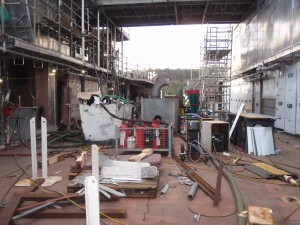 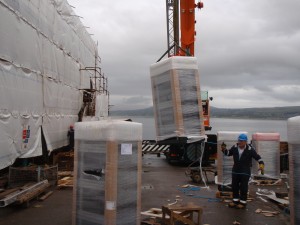 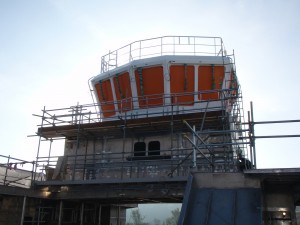 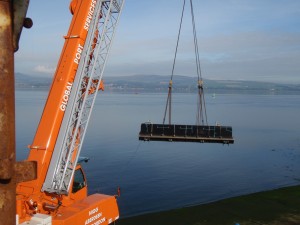 The build on MV CATRIONA is progressing well and is on time and on budget for her launch later this year. 100 per cent of fabrication was achieved this week and the hull is now complete. The shipyard is undertaking factory tests of equipment and fitting the generators and pumps. The paint application is scheduled for next week. The vessel was surveyed by Lloyds week commencing 24th August. 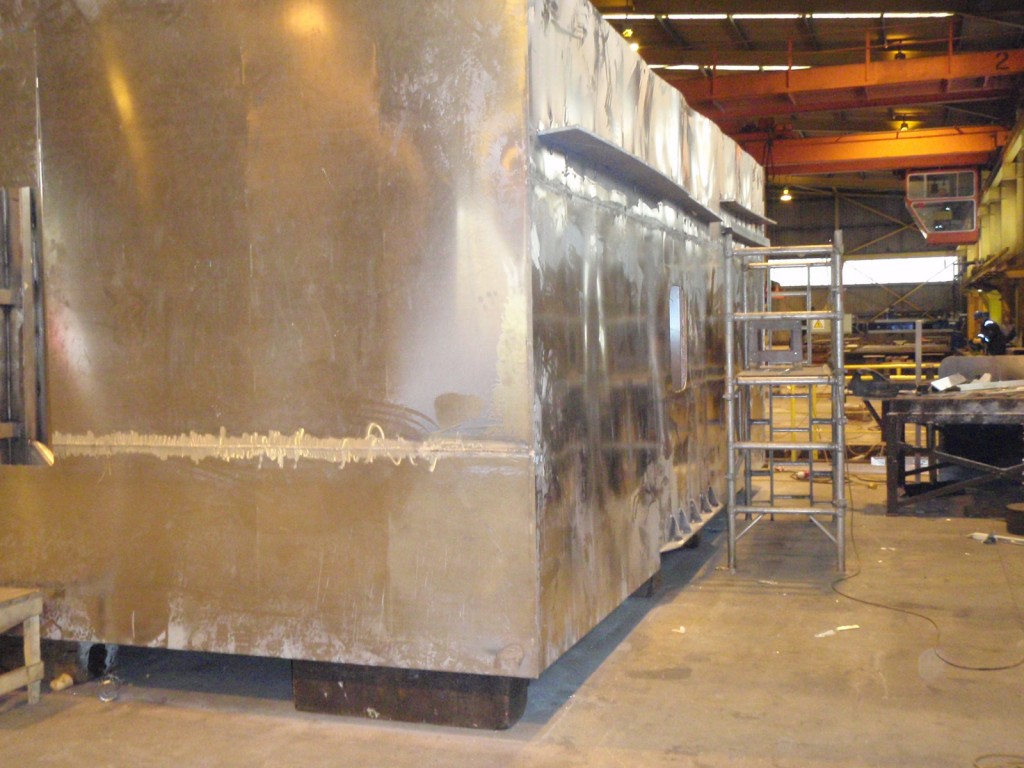 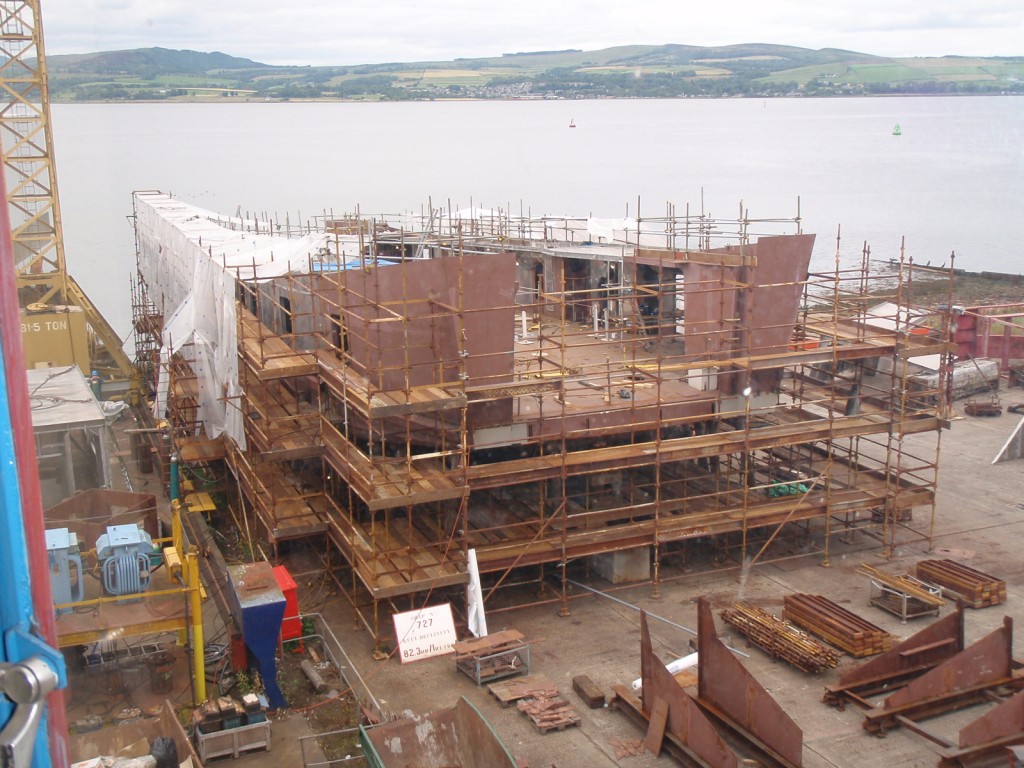 The rest of the units are aluminium and are being fabricated inside the sheds now and next few months.

Progress on Hybrid III going well, within budget and on time. Six units are now on the launch slip.

The build is still on schedule to be launched by end of the year.

Factory test of equipment such as engines and prop units are due to take place in next couple of months.

Week 9 of build and the first two units (block unit one and block unit two ) are placed on the launch berth of Ferguson shipyard.

These two units are the full width blocks across the middle of the ship between the two engine-rooms.

Just left of centre as look you can see the ships fuel tank, right of this is the watertight door opening between the two engine-rooms and to the right on the ships shell you can see the three openings which are the sea inlet to the machinery coolers.

Work on Hybrid III at Ferguson Marine Engineering Ltd (FMEL) is progressing well and the keel will be laid in next few weeks.

Below is an image of a unit in the fabrication shed.

All main machinery has been ordered and the ship is on budget and within the time plan.

First Minister Nicola Sturgeon marked the start of construction on MV CATRIONA during a visit to Ferguson Marine Engineering Ltd (FMEL) on the River Clyde on 19 December 2014.

As part of the ceremony, Ms Sturgeon started the computer-guided laser to cut the first steel. She also toured the facility and met some of the workforce who built the two previous hybrid ferries, including the MV HALLAIG, launched by Ms Sturgeon in December 2012.

I am delighted to be invited to take part in this steel cutting ceremony and mark the start of work on Scotland’s third hybrid ferry.

This investment by the Scottish Government is a vote of confidence in our shipbuilding industry, and shows that Scotland remains at the forefront of ferry design and innovation. We want our ferries to be sustainable and reliable. This new vessel will be fuel efficient and have lower maintenance costs, whilst ensuring a quality service for passengers.

I wish the shipyard success with this project and look forward to seeing Hull 727 take to the waters in 2016.

Today’s steel cutting ceremony marks the first important milestone in the construction of a new hybrid ferry for Scotland as work gets underway to build the vessel. Hull 727 will become the third hybrid vessel in our fleet, strengthening our commitment to using cutting edge technology and design to create innovative, sustainable and reliable ferries.”

“We look forward to the new hybrid vessel going into service in 2016 to join MV HALLAIG and MV LOCHINVAR, our existing hybrid ferries. It is the latest step in our ambitious fleet renewal plans to ensure our ferries continue to meet the needs of the communities we serve.

The £12.3 million contract to build our third hybrid ferry, originally known as Hull 727, was awarded to Ferguson Marine Engineering Ltd in September 2014 and was the first major deal for the company after it was taken over by Clyde Blowers Capital. The Scottish Government investment, which is being taken forward by CMAL, secured around 80 jobs for the Port Glasgow and Inverclyde area, many of whom were employees of the shipyard’s previous owner and worked on the first two hybrid ferries.

We held a competition to pick the name of the new ferry in June 2015 and announced in July that MV CATRIONA had received the highest number of votes, with 44% of the vote. She is the third ferry in the Scottish Literature Class. Catriona is the title of a novel written by Robert Louis Stevenson in 1893 and is the sequel to the highland adventure Kidnapped, following the further adventures of its hero David Balfour.

The new vessel will be launched in Port Glasgow on 11th December 2015, before entering service in the autumn of 2016.